The History of Valentine's Day

Every year on the 14th February we celebrate Valentine's Day; gifting chocolates, flowers, and all sorts of wonderful Valentine's Day gifts, to the people we love and admire. It is an accepted tradition in today's modern society, and means big business for card suppliers and gift retailers all over the world. After Christmas, it is one of the biggest events of the year, and people go all out to celebrate. But we are going to take a look back through history to see where Valentine's Day came from and how it has developed into the celebration we enjoy today!

As for the origin of Valentine's Day, there are varying beliefs as to how the festival developed. It is widely believed it has strong links to a heathen festival called Lupercalia; a celebration that honoured Lupercus, God of the shepherds. It is said that when Rome was first founded it was surrounded by wilderness: woods, forests, large areas of uninhabited land, thus bringing with it copious amounts of wild beasts, such as wolves. Shepherds worshipped Lupercus as they believed he protected their flocks against wolves, as well as promoted fertility amongst their sheep. Consequently, the festival of Lupercalia was created to honour and thank Lupercus; this took place each spring, which back then would've been the middle of February (15th).

With heathen festivals come many heathen traditions. In the case of Lupercalia, festivities began with priests of the local area gathering to thank Lupercus in the cave of Lupercal, where legend has it, the founders of Rome, Romulus and Remus, were nursed by a she-wolf. During their time in the cave of Lupercal, the Luperci would sacrifice goats and dogs, to the god of fertility; these animals were considered appropriate sacrifices because of their strong sexual instinct. After the sacrifice, two youths of noble birth were led to an altar where their foreheads were touched with the bloody knife, and then wiped clean with wool dipped in milk; hereupon the two youths were obliged to break out into laughter. After enjoying a sacrificial feast, the Luperci would then run through the streets with thongs made from goatskin, touching and striking all persons whom they encountered, particularly women, as they believed a blow from the thong was supposed to render a woman fertile. Legend has it, the young women in the city would also place their names into an urn. The city's bachelors would pick a name and the couple would be paired for a year; these matches often ended in marriage. As you can see there are a large number of rituals associated with the festival of Lupercalia, but the above seem to be the most widely accepted. 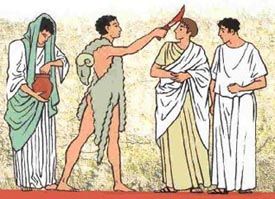 Who was St Valentine?

So that was the festival from which our Valentine's Day originates; but what about St Valentine? We hear many stories of who he was, and what he did, which isn't surprising because, according to scholars, there are three notable St Valentines who are all connected with the 14th February. One was a priest in Rome, the second a bishop of Interamna (now Terni, Italy) and the third St Valentine was a martyr in the Roman province of Africa. It seems plausible to rule out the last one; however, the other two still hold some question marks above them. 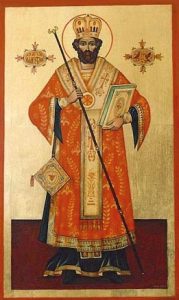 If we take a closer look at the priest in Rome, sources say he was martyred by the emperor of the time, Claudius II, on 14th February circa 270 AD. Claudius II involved Rome in many unpopular and bloody campaigns during his reign; because of this he had to maintain a strong army. However, Claudius struggled to do so; he strongly believed this was because Roman men were too strongly attached to their wives and families. To resolve this, Claudius banned all marriages and engagements in Rome. Valentine, realising the injustice of the decree, defied Claudius and continued to perform marriages for young lovers in secret; this continued until he was caught. Because of Valentine's defiance, Claudius ordered that he be imprisoned and executed. Legend has it that while in jail, Valentine left a farewell note for the blind daughter of his jailer, whom he had had fallen in love with, and signed it "From Your Valentine". For his great service, Valentine was named a saint after his death.

Many argue St Valentine was not a priest in Rome but a Bishop of Interamna, who coincidentally was also martyred by Claudius II, on the outskirts of Rome. There are many similarities between the priest's and bishop's stories, the most prominent being the connection to the jailer's daughter, and the note signed "From Your Valentine". Because of the similarities of these accounts, it is widely believed that the priest and the bishop were in fact the same person!

The feast of St. Valentine was officially established by Pope Gelasius I in 496 AD. Some believe Pope Gelasius I chose 14th February to commemorate St. Valentine's death, however there are many that argue this date was chosen to discourage the celebration of Lupercalia, a then outlawed "un-Christian" festival.

It wasn't until the Middle Ages that Valentine's Day became truly associated with love. During this time in France and England, it was commonly believed that birds mating season began from February 14th; this popular notion added to the idea that Valentine's Day be celebrated as a day of love and romance. The concept of linking Valentine's Day with romance and love was further promoted by 14th & 15th century English and French poets and litterateurs who produced an abundance of romantic verses; these popular verses encouraged lovers to celebrate Valentine's Day by expressing their love to their sweethearts, with an exchange of love notes and simple gifts, such as flowers.

The earliest surviving recorded Valentine is a medieval French poem written by Charles, Duke of Orléans, in 1415. The poem, entitled 'Farewell to Love', was written for his wife, Bonne of Armagnac, from the Tower of London where Charles was being held after his capture at the Battle of Agincourt. This Valentine still exists today as part of the manuscript collection at the British Library in London.

Valentine's Day began to be popularly celebrated in Great Britain in the 17th century. By mid-18th century, it was common practice for both friends and lovers, of all social classes, to exchange small tokens of affection or handwritten notes. By the 1900's, due to improvements in printing technology, cards began to replace written letters; they became mass produced, printed with verses and poems. Cheaper postage rates contributed massively towards the rise in popularity of sending Valentine's Day greetings.

So, it would appear that there is a large amount of mystery shrouding the development of the day we celebrate as Valentine's Day. We can be fairly certain that it originates from the heathen festival of Lupercalia, and that the St Valentine we talk of was either a Roman Priest or an Italian Bishop (or maybe these are the same person). But the smaller customs seem to have sprung up from odd events across Europe throughout the last few hundred years. It therefore seems that all these events have come together to create the day we know as St Valentine's day.