Gift Giving Around the World

How - and what - to give (and what to avoid!) in different countries around the world 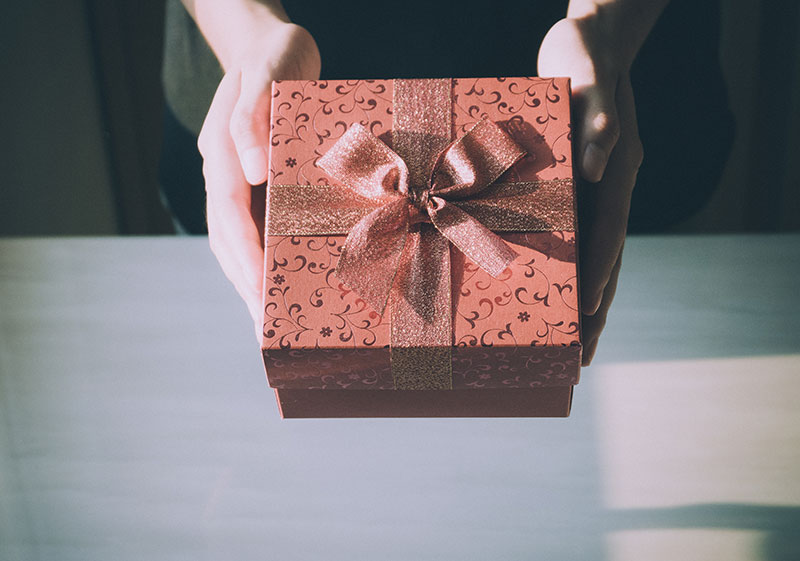 There is no greater pleasure in life than giving. Seeing someone's appreciation for a well-chosen gift often feels more rewarding than actually receiving a gift yourself. A well-chosen gift can convey a message of love, appreciation, respect, or friendship, whereas a poorly-chosen gift has the potential to say the opposite- and to offend. The factors that make gifts good or bad vary from person to person and culture to culture.

Find Me a Gift has done some research to find out a bit more about gift giving around the world.

In some cultures, such as in the UK and the US giving cash or vouchers is quite usual and the receiver generally enjoys being able to select their own gift. Similarly, it's becoming quite the norm for a Bride and Groom to ask for money, now that couples often already cohabit and don't need to set up a home.

It's also common practice to give money for wedding gifts in many Asian cultures, but the money should be in an envelope. In Japan, it is said that the money should be an odd number, as if it is an even number the couple could split the money and part ways! A Hungarian tradition is for the groom to give the bride a bag of coins (he gets a bundle of handkerchiefs in return - oh dear!)

Chinese people celebrate Chinese New Year with monetary gifts in red envelopes, with the money in even numbers for luck. Tet in Vietnam, which often co-occurs with Chinese New Year, is a festival where people usually give money to children. In Turkey, newborn babies are also often given monetary gifts and it's a Turkish custom to pin gold coins to a bride's wedding dress.

The host with the most

When invited to someone's home, it's a universal custom to bring a gift of some description. Flowers, food, and alcohol are typical gifts in many cultures, though in Argentina and many Muslim countries it's considered a no-no to bring wine and in France the host or hostess usually likes to choose the wine to complement the food. Other wine-growing regions, such as South Africa, only appreciate wine from their own country, as they consider this to be superior. Germans, on the other hand, consider German wine to be 'cheap' and will be far more appreciative of imported Italian wine.

In Malaysia, any gift that you take should be presented shortly before your departure, rather than on your arrival. Don't bring any type of food with you in Singapore as it implies that you think the hosting will be inadequate!

Good quality gifts are appreciated in almost all European cultures, but you should generally avoid gifts that are too extravagant as they may embarrass the recipient, particularly in a gift-exchange scenario. If you are visiting another country, a gift from your own country (especially of food) is generally a welcome gesture. It's ok to push the boat out in Egypt, however, where a more expensive gift signals your esteem.

Soap, cosmetics, and picture frames are popular gifts in Vietnam whilst in Turkey decorative items such as vases, goblets or ornaments are appreciated. Whip up a meal for a friend in Italy and they're bound to be appreciative, as the culture celebrates the act as a 'labour of love'. Whereas sweets and small electronic items are popular in Egypt, Israel and India. Books are appreciated in Israel and Kuwait, as are crafts.

Be aware of cultures such as Japan that practise gift-giving reciprocity. This is where a gift is always received with the presenting of a gift in return; giving an expensive gift to a South Korean who has a less expensive gift for you (for example) can cause them to 'lose face' - a serious thing in their culture. Gifts to seniors in South Korea should be of a higher value.

Bringing gifts for the children in the house is often a welcome gesture, particularly in child-centric countries such as Sweden, Spain, Turkey, Mexico, and Morocco. These gifts can be sweets, items from your local sports team, or small toys.

Gag and novelty gifts are popular in the UK and United States, especially for milestone birthdays such as a 30th or 40thfor example, and are increasing in popularity across Europe; but they are not appropriate in most Asian, African and Middle Eastern cultures. A well-made compass for Muslim associates in countries like Egypt or Saudi Arabia makes a great gift as it enables them to face in the correct direction for their regular prayers.

Wrapping is considered an important part of the process in many cultures. In Japan, the presentation of the gift represents your esteem towards the recipient and is more important than the gift itself. Portugal, too, places great value on beautiful presentation.

In India, Vietnam and Thailand the gift should be wrapped in brightly coloured paper, to signify happiness. In China, red wrapping is considered lucky. In Portugal, on the other hand, red is the colour of revolution and considered offensive. Many countries including Italy, Brazil, Chile and Costa Rica do not wrap gifts in blue, black or purple paper.

The Egyptians go a step further and wrap their gifts twice - once in plain paper and once in coloured paper. A veritable nation of pass-the-parcel experts!

In some countries, such as India, Egypt and Morocco, gifts should be presented with your right hand (both hands if it's too heavy) but never with the left hand alone, as it's considered unclean. On the other hand(!), in China, Japan and Vietnam, alongside a number of other Asian countries, gifts should always be given and received with both hands.

Thanks but no thanks

In many cultures, the usual gift-giving protocol is for one person to offer the gift, and the recipient to accept and say thank you. In England and the United States, it's quite common to offer some verbal form of protestation such as 'You shouldn't have!' whilst accepting the gift. It's also typical for the giver to comment that the gift is 'just a little thing' (or in Japan 'an uninteresting thing'). This signifies both your humility as the giver and that your relationship is more important than the gift implies.

In most European cultures, accepting the gift straight away is polite and any refusal (except in specific circumstances such as where the gift could be construed as a bribe, or sexually inappropriate) is offensive. In the Czech Republic, however, it is normal to refuse a gift once and then the giver must 'insist' and the gift is then accepted. This is sometimes done in England, Scotland and Wales in response to an offer or a spontaneous gift ('Oh no, I couldn't possibly accept!') but never to a planned and purchased gift as this would be considered rude. Ireland, on the other hand, seems to also operate on a 'refuse first before accepting' rule - possibly stemming back to the potato famine, as waiting for the giver to insist would indicate that they could truly afford to give the gift.

In Japan, the tradition is also for the gift to be refused once or twice before being accepted, and in China it's quite usual to refuse a gift three times before accepting it. In Hong Kong, accepting a gift the first time it is offered is considered greedy. Puerto Ricans also typically reject a gift or invitation a few times before accepting.

Rip in or hang on?

In Canada, Belgium, New Zealand, Denmark, Greece, Hungary and Italy, opening the gift straight away and expressing pleasure (no matter what you really think!) is the cultural norm. Restrained folk in countries like China, Singapore, Egypt, Morocco, India, South Korea and Malaysia consider it politer to put the gift aside and open it in private. In Puerto Rico, gifts should be opened straight away, but it is considered very rude to open them in public. You must not rip the paper in Thailand but instead carefully unwrap it and fold it up afterwards.

What not to buy

When buying gifts, consider any cultural or religious implications to certain materials. Devout Muslims do not drink, making alcohol an unsuitable gift (including alcohol in perfume). Similarly, Muslims and Jews should be given no products derived from pigs, and Hindus should not be given any animal products. In Saudi Arabia, Muslim men consider gold jewellery and silk clothing to be effeminate so it is best avoided. Some Muslims also don't appreciate artwork depicting nature, humans, or dogs.

Across many cultures, including Greece, Brazil and China, gifts of sharp items such as knives, scissors and brooches signify the severing of your relationship. In Italy and China, handkerchiefs indicate sadness and you should also never gift a clock in China as it symbolises death. Another gift to avoid in China are umbrellas, which denote separation. In Singapore, straw sandals and white candles are not suitable gifts - again because there is a link with death.

When visiting countries that pride themselves on particular specialities, you should avoid giving this product as a gift (though you can expect to receive it). This includes things like chocolate or beer in Belgium, silver in Mexico or fruit and coffee in Costa Rica.

Do thorough research on your choice of flowers before giving them as they have different meanings and uses in different countries. For example, in Argentina, a gift of yellow roses signals contempt and in the Ukraine yellow flowers are for funerals, but in Germany yellow roses are particularly appreciated. Don't give flowers at all in Egypt or Italy as they are only for weddings or funerals. In Belgium, you should avoid giving flowers in odd numbers, apart from 13, which is fine. In Austria, you should avoid giving flowers in even numbers, apart from 12, which is fine! Wreaths are not welcome in Norway, even at Christmas time.

Don't give gifts at all in Saudi Arabia unless you are very close with the recipient. Giving a gift to someone you don't know extremely well is so embarrassing that they may well be offended. In the Netherlands, gift giving is also saved for those who know one another very well.

Be careful not to over admire any item in someone else's house in Egypt, Puerto Rico or Turkey as they may feel obliged to give it to you! Not only is this mortifying but you would then be obliged to give them a reciprocal gift of equivalent value.

Gift giving is usual in many Asian business cultures. Chinese companies, for example, spend large sums of money on gifts for clients. Gift giving at a senior level is also normal in many African countries and some Central and South American ones. In Poland and Portugal, too, business gifts are quite common.

In other parts of the world, business gifts are less typical, but it is still socially acceptable to present business associates with a small gift upon the closing of a deal. You can also buy a gift for an assistant who has been particularly helpful, but in many countries such as Argentina, Chile, Mexico the protocol is for male business people to present this to any female associate as 'a gift from my wife' to avoid the gesture being misconstrued. Be careful in Singapore: they pride themselves on being one of the most corruption-free countries in Asia, so gift giving in business must be done transparently and Government employees are not allowed to accept any gifts or money.

Find Me A Gift

This research was conducted by Find Me A Gift - and we're pretty sure that no matter what the occasion or the culture, we've got something for everyone in our amazing range of over 7,000 unique gifts.